Two Key Factors due to which Lead Generation Fails

By Pranali VichareSeptember 24, 2019No Comments 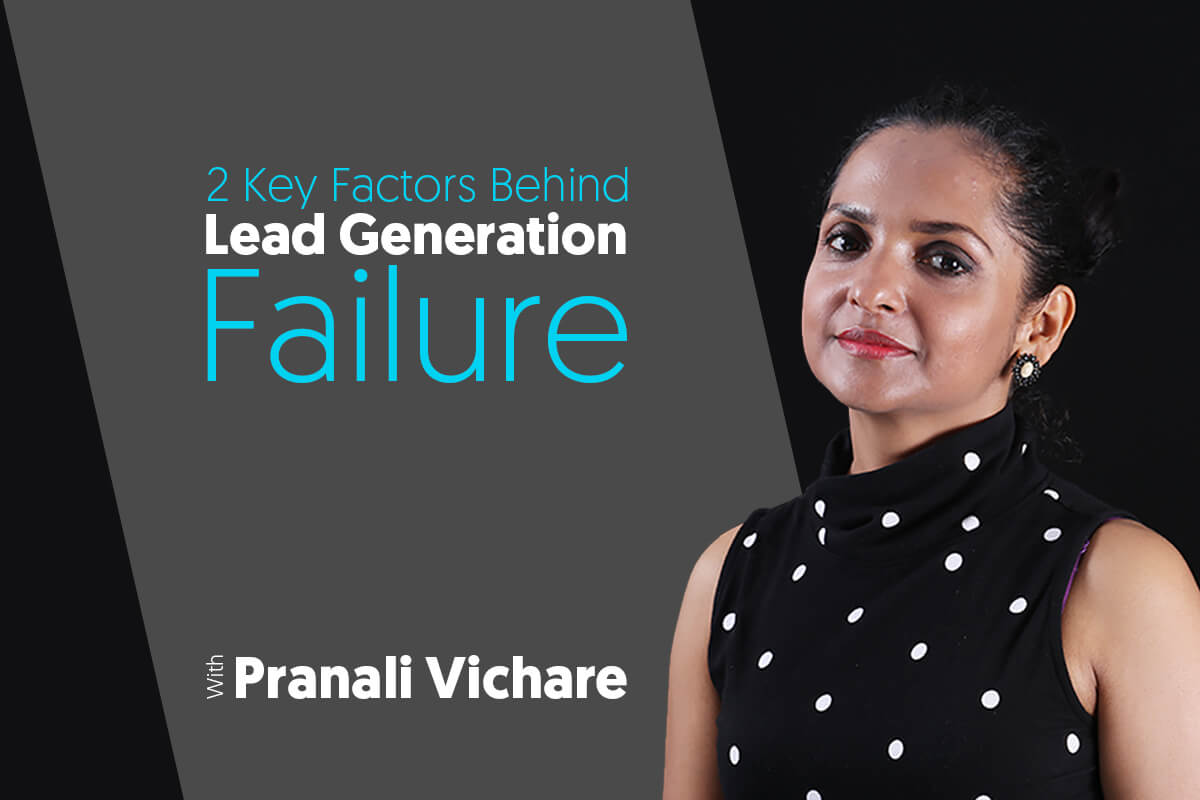 Let’s talk about two important factors due to which Lead Generation fails. Today’s discussion won’t be on the ‘Operational Part’ of lead generation failure which includes poor sales script, inadequate process, and team, wrong target market, etc. We will consider the Management’s perspective – how the Vice President of Sales or CEO of the company thinks when it comes to lead generation.

The first key factor is to understand that Lead Generation and Sales are not the same. A lot of people get confused with that. They are neither similar nut two different teams and departments. They are consequent to each other but they are not the same. Let’s look at the impact of this confusion.

Across many organizations, management and team members make the mistake of expecting ‘ROI’ from Lead Generation, in terms of Sales. It’s a wrong objective – one that cannot be achieved. It’s wrong to expect Lead Generation to bring sales. Your Sales team should take care of the sales function, and not the lead generation team.

What value should you expect from your Lead Generation team?
The value lies in the lead generation team leveraging your company, services, and product in the target market, getting a response from the market, and then processing it through sales.

Purpose of lead generation is to understand market demands and prospect requirements. The team might not be able to sell, but they are trying to penetrate and capture the target market, increasing market awareness. This is the value, that the lead generation team should be creating. They should not focus on sales at all.

In my observation, Sales is too passive and lead generation engine is too aggressive in many organizations because of which sales is not able to catch-up with the lead generation team and the work they are doing.

Often the response from outreach, received by the sales team, after a lead was passed on to them, is not registered and reciprocated to Lead Generation team. So there is a gap in the cycle of lead generation and sales in your organization, because of which your Lead Generation team suffers.

Many a time, lead generation teams have immensely marketed the company’s services or products through fabulous pitching and impressive approaches. The target prospect has got extremely impressed yet the lead has gone cold, with sales taking over.

would love to hear your story

Human-centric fact finding, visualization of the right questions, requirement-specific data points, etc. isn’t achievable by automation. Experts differentiate this journey with empathy and a clear understanding of the client objective.

In house DIY projects with short and crisp surveys, and leveraging machine-based research tools, to streamline the data collection process. This helps to guage the market experience, buyer persona, shifting consumer behaviour, etc. – all of which being crucial to actualize the a well-planned lead nurturing process.

The frontend design must convey the intent of the business and at the same time it should delight the viewer.

Eliminating poor performance and poor design aspects is the key to get visitor attention and leads to engagement.

Portal/application interface loading speed must be optimized to provide a positive UX. It becomes necessary to identify the performance roadblocks in terms of back-end scripts,heavy visuals, font-load, etc.

Frontend is not only about UX and functionality but also about the design aesthetics. Interface design can be enhanced through design-thing driven visuals, color scheme, typography, animations and interactive layouts.

An Insight To Analyze The Database For Identification Of Improvements

Track your lead behaviour to understand whether they are really interested to collaborate with you.

Development of reports so that you can compare past performance with the present and redefine your strategy if necessary.

In-depth analytics to help you sell smarter, better, and faster.

Personalized marketing campaigns for prospective customers to interest them in your business.

Segmentation of the customer database and identifying each segment’s pain points to run the campaigns that engages them.

Identifying your ideal buyer persona so that the marketing efforts can attract leads that a good fit for your product or service.

A Strong Support To Keep Your Database Up-To-Date

A well maintained CRM to improve your company’s customer service by providing accurate and valuable information for your sales team.

A better insight to dedicate your valuable time and energy to engage and attract qualified leads.

Increase your profits by making your sales team more effective and productive by preventing incomplete, unreliable, and inaccurate data.

One of the most significant equation for the success of sales is having a strong and capable team that’s in sync with your business goals and offerings, connecting them to the audience in a unified sales voice, but in a personalizing the same for qualified results. Here, your team can be equipped or we become your extended team.

It’s not about a setting a portioned budget for lead generation and accordingly working towards strategies that will suite it. It’s about having a clear idea of the best-fit strategies to reach your target audience and find a win-win budget allocation aligned with organization’s goal.

With personalization of outreach being a strong mantra of sales enablement success, it’s important to identify and understand the right audience. This calls for discovery of the right universe who needs your offering and what are the channels that work best to reach out. Your lead-gen strategy gets tailored accordingly.

i.e. defining the overall project objective based on the stakeholder interviews and the high-level problem statement.

We orchestrate outbound campaigns on research data to resonate with the relevant audience, inbound to get noticed, besides leveraging CRM to continuously nurture customer relationships.

a window to reach qualified leads with personalized campaigns and appointments

everaging the power of digital ads PPC to Adwords, supported with right keywords that help you stand out

Design Thinking enabled UX research and UI design are the foundation to empathize with customers and continuously deliver business value. We help orgs embrace this under a flexible approach, enabling the to enrich customer centric innovation and design capabilities.

The Way We Deliver This

Models – flexible engagements that are structured based on the user pain points and assessment of the project need – be it a new product turnkey, an experience augmentation, or a continued collaboration to enrich experience design.

UX Design – re-imagine experiences with innovation and creating of prototypes, led by design-thinking and UAT to ensure validated product/service designs.

The Program That Pans It All

our foundation to enrich your sales pipeline – universe discovery and detailed reports on buyer demographics and market firmographic data. We follow it up with detailed profiling of the target audience to support inbound campaigns and outbound sales pitches.

Today, to generate and drive business value, leaders need to have a design-thinker’s mindset. We enable leaders in this journey, exploring challenges and opportunities with users as the focal point. Taking a step ahead we infuse creative thinking to arrive at market-defining ideas.

Mapping This Into Action

Strategy – architected with human-centric experiences at the core and design thinking as a pivot. The end goal is a design-led strategy a transforming products, offerings, processes, even the entire enterprise.

Reading the subtle sales signals from tools that capture buyer intent data, we operationalize strategies that engage with the buyer at the right time, with the right approach.

Mapping This Into Sales Process With

crafted with a commercially viable plan that leverages the buyer persona and actions to outline a systematic sales engine via a playbook, support with sales enablement tools, and set up a capable team at arm’s length empowered with the above.

Every CMO needs an extended team for marketing enablement. A hybrid of varied expertise – analysts, storytellers, creative minds, and problem solvers – available at a short notice and supporting with assets

Our Role As Your Extended Arm:

Only a fraction of the content from a brand evokes customer reaction – due to a growing inconsistency between the brand’s message and their packaging through advertising and PR.

We Eliminate This Disconnect With:

Along with the creative part, the tech front has to have strong pillars to hold everything up and we develop what they call as flawless websites. With through testing and smooth migration, we promise to you a hassle free experience with an error less product.

When we say modern, we refer to a website that connects with the right audience and delivers the right value to them. We design and prototype the website with an intent of creating an unforgettable experience which will not just help you convert the customer but also strengthen your positioning in the market.

Every business has a website and so does your competitors but, no successful business can exist digitally without a professionally designed website with a personalized experience and modern web design. Your website should be your story teller.

The secret of creating the most relevant end results lies in the amount of effort spent in understanding the requirements. With our Discovery Workshops and Design Thinking approach, we make sure to stamp out all the nuances and focus on key areas where your website needs to have an impact.

Discovery of the problem, the gaps and opportunities in the marketing function

An Insight To Analyze The Database For Identification Of Improvements

Create better sales funnel, know your win/ loss rates, do sales predictions, track KPIs, and much more. Track your lead behaviour to understand whether they are really interested to collaborate with you. Development of reports so that you can compare past performance with the present and redefine your strategy if necessary. In-depth analytics to help you sell smarter, better, and faster.

Personalized marketing campaigns for prospective customers to interest them in your business. Segmentation of the customer database and identifying each segment’s pain points to run the campaigns that engages them. Identifying your ideal buyer persona so that the marketing efforts can attract leads that a good fit for your product or service.

A Strong Support To Keep Your Database Up-To-Date

A well maintained CRM to improve your company’s customer service by providing accurate and valuable information for your sales team. A better insight to dedicate your valuable time and energy to engage and attract qualified leads. Increase your profits by making your sales team more effective and productive by preventing incomplete, unreliable, and inaccurate data.